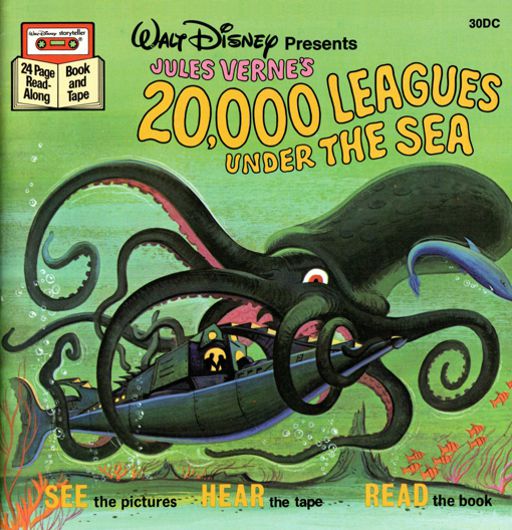 I’ve got a whale of a tale for you, in fact, I have two, I swear by my tattoo (to paraphrase the song). So, with the passing recently of Kirk Douglas, I thought it’d be a good time to add 20,000 Leagues Under the Sea. I know Spartacus always comes up as the quintessential Kirk Douglas movie, but to be honest I’ve never seen it and the only thing I associate him with is Ned Land in Leagues. I love this movie. It always impresses me how well made it is and how good the effects are for 1954. I’ve seen movies that are from the 60s and 70s that don’t look this good.

Now, here’s why I have a double feature for you. There are two versions of this read-along. And not like the way there are two Mary Poppins or Star Wars, with artwork vs photos. 20,000 Leagues uses the same artwork in both books, but with entirely different audio. The first version is from 1971 and narrated by the “story reader” woman with the enunciated dialogue. The 1982 version is more fleshed out with ambient music and better voice acting. But also funny is the 1971 version names the pet sea lion Snoopy instead of the actual name of Esmerelda! No idea why. Both versions don’t have the same ending as the movie. I guess you can say Disney Disney-fied their own movie for the book, lol. Anyway, I know I say this about a lot of these books, but I love the artwork in this. Full paintings and lovely double-page spreads. My favourite is page 17, with the eye in the porthole.