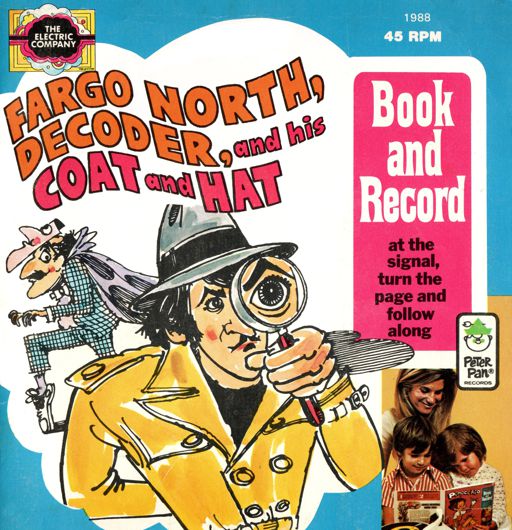 Anyone remember reading Fargo North Decoder stories in Electric Company Magazine? Even though this one is odd and is probably not going to be a sought after read-along, I personally do like that it exists. I think I probably liked him because he seemed a bit like Inspector Clouseau or Inspector Gadget. Reading the wikipedia, he was in the Electric Company TV show in the 70s too, but I’ve never seen that. I had a subscription to the magazine from 1982 to maybe 1986. Actually, the copyright on this 1973, so it was produced to tie in with the show, which ended in 1977. Speaking of which, I’m not sure why the front covers of the Peter Pan band books have what appears to be a year (this one says 1988) but the date on the inside is more accurate. The Fred Flintstone one is like that too. Maybe it’s a random code number that just looks like a year. I doubt it was reprinted in 1988.