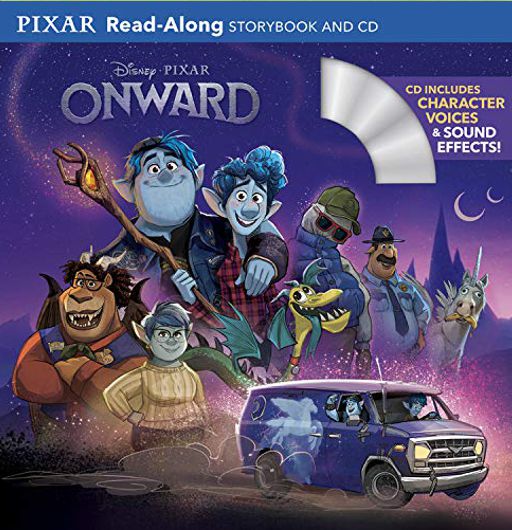 There’s a new read-along available in stores and online now for the upcoming Disney Pixar movie Onward. Obviously I’m not adding it to the site because it’s an in-print book, but if you or your kids are into read-alongs, I encourage you to pick it up and in turn encourage Disney to keep releasing these great books. Honestly I’m happily surprised they keep making them, given other things Disney gives up on (I’m looking at you, 3D home releases of movies in North America).  Plus while I know I still like physical CDs that I can use in my car, most people are into digital streaming audio and apps, so the physical release of a read-along on a CD is awesome. Side note; I like how for awhile now the CD is in a plastic folder inside the book cover. The ones released 12 years ago had a plastic raised hub glued to the books to hold the CD, but then when you put them on the shelf, the thickness of the hub actually takes up more space and presses into the book next to it.

Anyway, I bought a copy at my favourite Save-On Foods store. I’ve been able to find read-alongs at this grocery store for at least 14 years now, which is interesting because the local book store doesn’t even always get them. The price on them has gone up a couple of bucks in 14 years, but still less than $10 CAD which is good for a book and CD, I think. Online it looks like Amazon and Chapters.Indigo have it.

I haven’t listened to it yet or read the book because I’m not going to do that before I have an opportunity to see the movie, but it looks like it maintains the audio and character voices, and uses hand-drawn images instead of the CG from the movie. So you can consider it a unique experience!