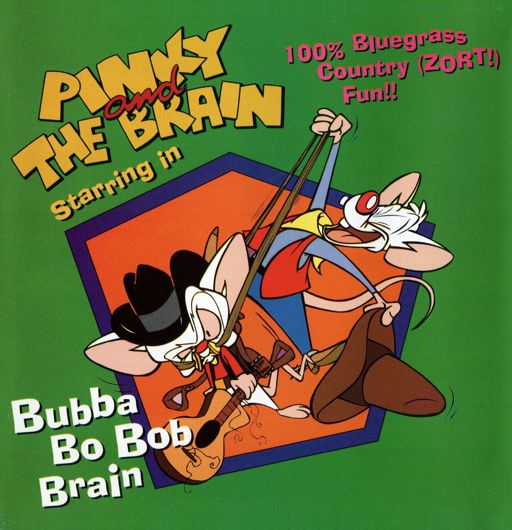 Are you pondering what I’m pondering, Pinky? It’s Pinky and the Brain Starring In Bubba Bo Bob Brain. This one is unusual because it’s not exactly a page-by-page book. It’s a foldout poster inside a standard CD jewel case, and each square when unfolded is a “page”. But I think when they made it, they had the intention of dividing up the pages differently, because there are a few places where Brain says “Turn the page” but the dialogue is still on the same page. Or vice versa, it’s a new page, and he doesn’t say to turn. So I edited the audio to make sense for the read-along as a flipbook, but if you download the mp3, it’s the original recording. For the flipbook I also added a blank page on the inside of the front and back covers, so that the double-page spread where Brain is on the stilts remains together.

But technical stuff aside, this is still a fun one! It’s based on the episode of the same name, and it’s narrated by Dixie Carter from TV’s Designing Women (probably other stuff, but that’s the only one I know of). I loved Animaniacs and especially Pink and the Brain. Another interesting thing about this though is the song Brain sings isn’t the one from the TV episode. Maybe they thought it’d be better to flesh it out for the CD. I actually like the one from the show better, maybe because I still periodically get it in my head 25 years later. Oh, maybe that means Brain’s plan to take over the world is actually working on me, albeit slowly.