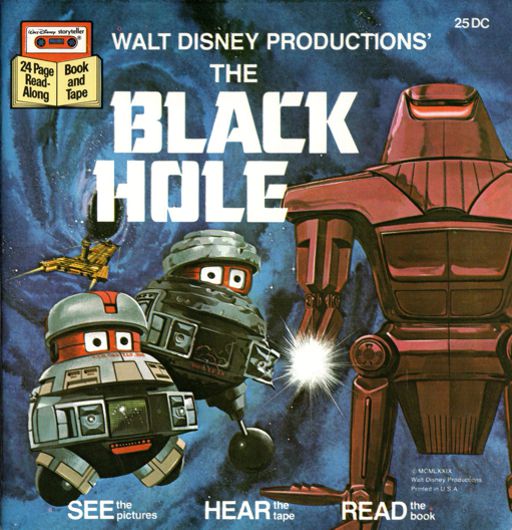 Don’t stand on the edge, it’s The Black Hole! When I was a kid we had a Shreddies cereal box here in Canada that featured a tie-in with The Black Hole. The prize inside was a little signaller thing, and the back of the box featured all of the robots from The Black Hole. I was excited because I think I thought it was a Star Wars movie and since Artoo and Threepio were my favourites, I assumed that B.O.B and V.I.N.CENT were new droids. I never got to see this movie until years later when we rented it on VHS and I was actually kind of disappointed, because it was a bit more dramatic than Star Wars, especially the ending with the Heaven and Hell stuff (which isn’t in the read-along). But thankfully the robots were there for some comic relief!

The images in this read-along are kind of grainy, but I think it might be partially the paper it was printed on.