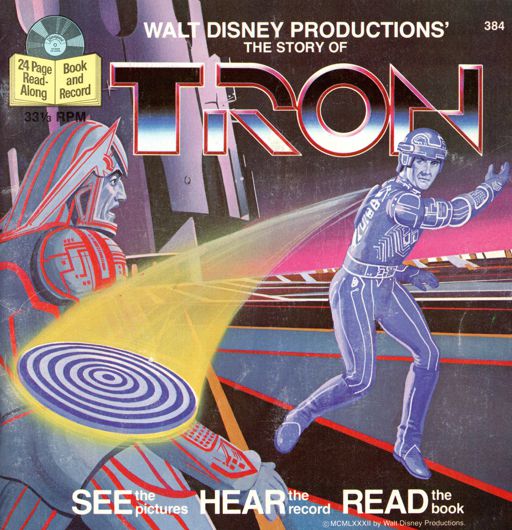 “On the other side of the screen, it all looks so easy.” Hey all Users out there, I have the Tron read-along up for you. This one has some unique artwork. The paintings look like more of a 60s style than the early 80s.

I had an Electric Company magazine that featured Tron when it came out, and I always wanted to see it, but it was years later that I finally got to rent it on VHS. I remember being a bit disappointed because somehow it didn’t look as cool as I had built it up to be, but I think that happened sometimes when I rented kind of decrepit VHS tapes that were warped and faded.

I’d like to have seen a read-along for Tron Legacy, but it seems that Disney only puts out read-alongs for their animated films, as well as Star Wars and the Marvel movies. They don’t even do ones for the live action remakes of the animated movies; they just re-release the original read-alongs to tie-in. But still, as I mentioned in the post about Onward, it’s awesome they make any read-along at all, so I’m happy for that!