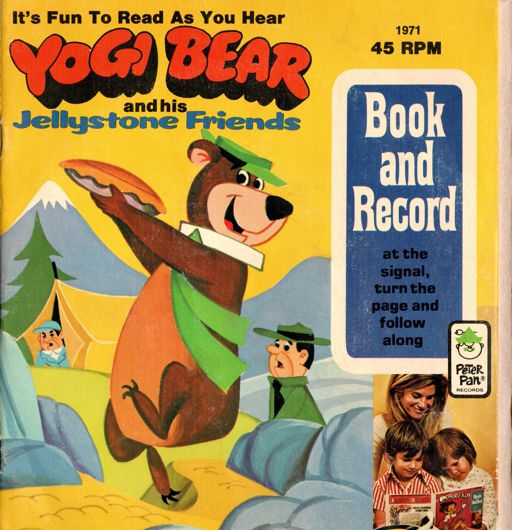 So I heard today is National Pie day, and thought that this Yogi Bear read-along would be appropriate, because it involves him stealing a pie. I love the pictures; they’re classic Jellystone Park images. I was hoping since the title is “..and his Jellystone Friends” that Doggie Daddy or Snagglepuss might show up, but alas they did not. I do have another book with Huckleberry Hound that I will do in the near future. Anyway, as it turns out, Yogi doesn’t even have any dialogue in the whole story. It’s just Ranger Smith and Boo Boo. Boo Boo’s voice is kind of grating. I think it’s because the narrator is also doing the character voices on this one, so I forgive him.

I usually do page clean up to a certain degree on these books. Like getting rid of a bit of the shadows or folds that show up on the scans. But this one was a challenge. The paper is really nice, kind of a bit like linen, but when scanned, it shows up as sort of grainy. It’d be too hard to remove it all, and upping the brightness and contrast to get rid of it ruins the nice artwork, so I left it. It’s kind of nice though, as it seems “real.” On the other hand, the paper in the Fred Flintstone one was very thin, so I ended up removing some of the images that scanned through from the reverse side of the pages.